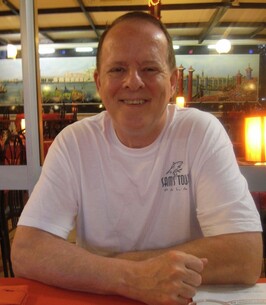 Lt. Colonel, Henry “Keith” Rimmer, 74, passed away peacefully the morning of July 12, 2021 in Honolulu Hawaii after a battle with Pulmonary Fibrosis. Keith was always positive even in the face of terminal illness through the end.

Keith was born in Norfolk, Virginia on October 31, 1946. He was an honored veteran who served in the US Navy, Virginia National Guard, US Army Reserves, and then another 25 years as a civilian contractor with the US Joint Forces in Korea. When he was not serving his country, he loved to travel, scuba dive, fish, eat, not watch the Red Sox play (but always hoping they win) and briefly make a few donuts.

Keith is survived by his spouse Bong Suk in Hawaii, Daughter Paige & Son-in-Law Ryan Todd in Michigan, brother Marshall Rimmer in Virginia and grandchildren Ella & Remy also in Michigan. He is preceded in death by his parents Katreen Hudgins & James Henry Rimmer as well as his brothers Ronald, James and Robert Rimmer.

With loved ones spread around the country a funeral service in one place is not possible. At his request, his ashes will be scattered in the ocean he loved.

In lieu of flowers donations can be made to the Pulmonary Fibrosis Foundation or the charity of your choice.