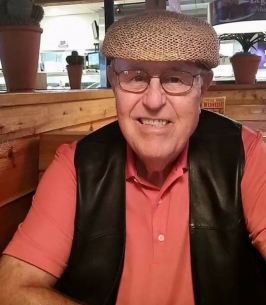 Long time Oahu resident John O. Falk passed away at home on Tuesday, June 14, 2022. Born Ottfried Falk in Kassell, Germany in 1938, Mr. Falk lived a full and adventurous 83 years. As a Journeyman Baker he toured Europe on his motorcycle, then worked a a chef in San Francisco after immigrating to the United States in 1966. He met and married his first wife Leda Slattery (b,.1942 - d.2005) in the Bay Area and eventually the family moved to Anchorage, Alaska where John helped to build and maintain the Alyeska Pipeline.
John fathered two daughters: Teffany O'Brion of Eugene, Oregon and Jessica Falk of Lexington, Tennessee. He was always delighted by his 4 grandchildren Kaitlyn, Jack, Maegan and Conner and became a Great Grandfather to Leo two years ago.
John moved to Oahu in 1982 after falling in love with the Islands on a family vacation. He worked as an Electronic Technician for many years and upon retirement joined the crew of drivers at Manheim to stay active.
He met and married his current wife Victoria Barit Falk in the Philippines in 1990. They recently celebrated their 32nd anniversary and are frequently described by their friends as inseparable.
John is preceded in death by his parents, Otto and Martha Falk and by his 4 siblings - Hans, Siegrid, Ernest and Claus.
John Falk was a wonderful father, husband, neighbor and friend. Although he was born far away. He embodied the Spirit of Aloha with his warm smile and generous heart. He will be sorely missed.