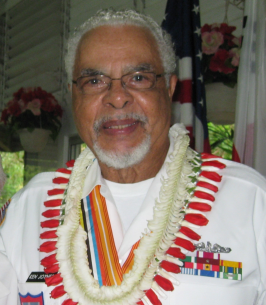 Kenneth Joyner, Sr., exchanged his cherished submariner’s dolphins—the insignia of the Naval submarine service—for wings when he passed away from natural causes on March 26, 2022. He was ninety-one years old. At the heart of Kenneth’s long and full life were family and service—to his country and the community.

Kenneth was born February 2, 1931 in New York City to Mary Augusta and James Walter Joyner. He was the second of five children and the last surviving sibling. After attending Dewitt Clinton High School in the Bronx, Kenneth enlisted in the United States Navy in 1950. Upon graduation at the top of his recruiting class, he was selected to attend nuclear power school by Admiral Hyman Rickover, the father of the nuclear Navy. This rare accomplishment for an African American helped to integrate the Navy; at the time, Black sailors typically served as stewards, cooks, drivers, and similar service roles.

Kenneth graduated from nuclear power school a year later and served honorably on diesel and nuclear submarines as a radioman, his occupational specialty, rising to the rank of senior chief petty officer. His technical training engendered a lifelong fascination with new technology and gadgets—such as the first-generation calculator, cell phone, and iPad.

He taught communications at the Officers Communication School in Newport, RI and also held the position of Chief of the Boat (COB) of the USS Plunger, the highest enlisted billet aboard that nuclear submarine. His service spanned the Korean War and the Vietnamese conflict.

During his Naval career, Kenneth earned numerous awards and accolades, including the Navy Unit Commendation (two awards), Vietnam Service Medal, China Service Medal, Korean Service Medal, and European Occupation Medal. The USS Plunger also received an award as the Navy’s top nuclear sub during his time as COB. Upon his retirement in 1974, he was commended for nearly 24 years of distinguished service and transferred to the Fleet Reserve.
After retirement, Kenneth went back to school and had a thriving civilian career as a realtor and businessman. He purchased a hair salon in Waikiki and worked in the cosmetology industry for over 30 years. He was also active in several community service organizations, including the Coast Guard Auxiliary, where he became the Vice-Commander. He was instrumental in rescuing some 300 swimmers during the Honolulu Rough Water Swim in 1985 and was commended by Rear Admiral A.P. Manning of the US Coast Guard for his meritorious actions.
Kenneth also served as Vice-Commander and Base Commander of the USS Bowfin, the Submarine Veterans Association, with the primary task of commemorating departed fellow submariners who served honorably in war and peace. In this role, he spearheaded many charitable initiatives including “Caps for Kids,” a program to lift the spirits of children hospitalized with cancer by making them honorary submariners. He was also active in the Korean War Veterans Association, serving as Vice President of the Honolulu Chapter.

Kenneth has resided in Honolulu for more than 50 years, and was married to his late wife Marsha Rose Hood Joyner for 35 years. He is survived by four adult children: Kenneth Joyner, Jr. of Wisconsin, Andrea Josiah of Florida, Glenn Joyner (Antonella) of Florida, and Joy Julks of Texas. He is also survived by three grandsons, Austin Josiah, Alec Josiah, and Giancarlo Joyner, as well as a host of stepchildren, nieces, and nephews.

A memorial service to honor his life will be held at Ballard Family Moanalua Mortuary, Sunday, April 24. Visitation begins at 11 am, followed by a service at 12 pm. Burial at Punchbowl National Cemetery of the Pacific will take place Monday, April 25, at 11 am. Contact family at andreajoy50@me.com