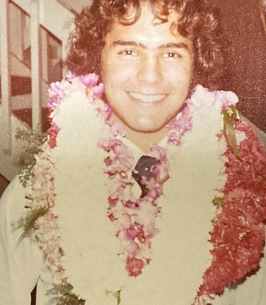 In memory of our brother, Larry Jr., may we acknowledge and share both our joy in the gift that his life was to us and the pain that his passing brings. In sharing the joy and the pain together today, may we lessen the pain and remember more clearly the joy.

Larry was just 62 years old when he passed away on Friday, June 18, 2021 in Wahiawa, HI. He was born on August 5,1958 in Cambridge County, England and became a US citizen July 24, 1964. Our Father Larry senior was in the US Air Force stationed in England.

He worked many different jobs in his life. He was a member of the pipe fitters' union and a tradesman, having installed many sprinkler systems in the various hotels on the Hawaiian islands. His senior year in high school he worked part time as a dish washer at Buzz's steak house restaurant near Peal Harbor. He eventually worked his way up to a cook/chef position. He was a great cook and could grill steak and seafood.

When he was in high school in Boone, NC, he worked at Hardee's flipping burgers. He saved enough money to buy himself a brand new TR 7 sports car. Our Uncle Ben (Herschel) was a car dealer and helped Larry to get a good deal.

Larry worked hard and was not intimidated in any way. He set his sights on goals and accomplished them and he did it with a great sense of humor. He loved people and never knew a stranger. He was very close to his family and had many friends throughout his life wherever he lived.

As a child he loved to fish and he especially loved his Pa Pa Willie who Larry believed was the greatest fisherman in the world. He enjoyed fishing with a pole in Hawaii and also learned to spear fish. He loved to surf and told many stories about encounters with sharks who knocked him off his surf board and lived to tell the tales.

Larry overcame many trials in his life and became very involved in recovery programs such as Alcoholics' Anonymous and Adult Children of Alcoholics. He would lead meetings and was a sponsor to those who wanted to overcome their addictions. He helped many people to do so.

There were many wonderful aspects to Larry's life, and many ways that he touched our lives. He will be remembered as our brother, a great friend, a generous uncle, cousin, and nephew. In all these ways and more, he made our lives richer and fuller.

I would like to dedicate the following poem to his memory -

You gave no one a last farewell
Nor ever said goodbye.
You were gone before we knew it,
and only God knows why.
A million times we will miss you.
A million times we will cry.
If love alone could have saved you,
You never would have died.
In life we loved you dearly.
In death we love you still.
In our hearts you hold a place,
no one else can fill.
It broke our hearts to lose you,
but you didn't go alone,
for part of us went with you,
the day God took you home.
We will meet again some day
I know in a better place.
I thank God He made you our brother
While you were here on earth.